Actually, that should say “Aiming Systems for Pistols”, but if you followed a link to get here, you are expecting to read about optics.  Technically, not all aiming options for handguns are optical, but more on that later.

Ten years ago, it was rare to see any kind of sights on a pistol besides the built-in ones, called “iron-sights” (no, they are not made of iron, and haven’t been for a very long time. Sorry.)  These days, not only is it not rare to see a handgun with alternative sights on it, more and more models are coming with them pre-installed.  New gun owners are often confused by this proliferation, and sometimes make mistakes in choosing a gun, so I thought it was time to write a post about this new paradigm.

First, let’s define what we are talking about.  All handguns have built-in sights.  Most rifles do as well, but not all, as it is often assumed that the owner will install another option.  It is worth noting that we won WWII with iron sights, and old-school riflemen often think optics are for weenies, but I digress.  The types of sighting systems (besides iron sights), in chronological order, include Telescopic, Laser, and Electronic.

Telescopic
As the name implies, this is a tube containing magnifying lenses that magnify the target.  Extremely common on rifles (hunting and target shooting), these are seldom seen on handguns.  When they are, they are usually special-purpose guns, used for hunting or target shooting.  The magnification varies from 1-4 power up to 9-12 power or above.  The greater the magnification, the greater the cost.  Inexpensive ones will often leak, and allow moisture inside.  That will fog the lens, and ruin the scope. 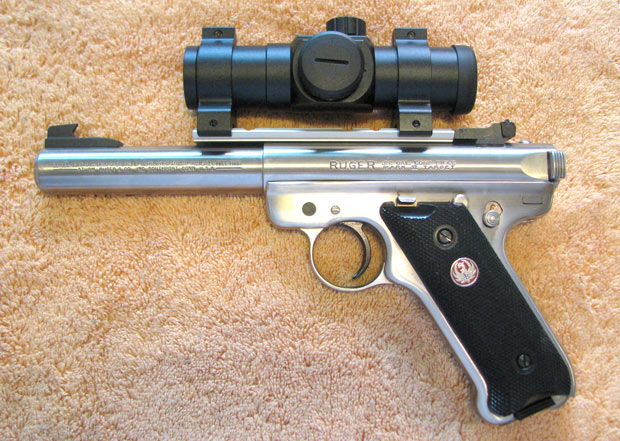 Laser
This is a device installed on a gun, that projects a beam of light out to the target.  Ten years ago, this was the hot ticket.  Some guns came with them from the factory, but the Crimson Trace company pioneered the process of adding laser capability to almost any handgun.  These are not as common now, although every crime-drama on TV uses the imagery of someone realizing there is a red dot on their chest, from a sniper on top of a building 300 yards away.  It is good TV, but lacks some realism.  In the real world, lasers have to be zeroed for the distance used, and, when used on a pistol, the red dot often can’t be seen further away than 25 feet, and never in daylight.  Another problem is that shooters have to focus their vision on the target, not the gun, so it is like driving a car by remote control.  It is harder than it looks, and is of questionable value for a new shooter, as they never learn to use their sights.  When the battery goes dead (which it will), you are stuck.

Electronic
These are, today, the most prolific types of non-iron-sight sighting devices in use on pistols.  They are also often used on defensive rifles, though not as much for hunting or target shooting.  As the name implies, these are, like lasers, battery-powered.  Electronic sights fall into two categories: red-dots and holographic sights.  Both types have to be turned on and off.

Don’t confuse the red-dot with a laser, which projects a red beam through space to the target. 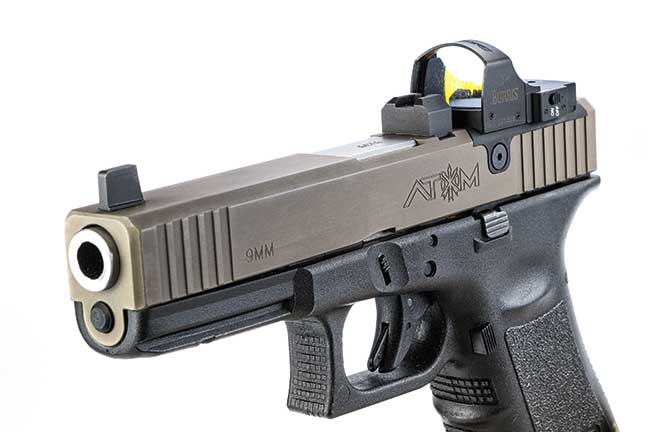 Installation issues
Lasers, if they are aftermarket, are often attached to the grips, and activated by either an on-off switch, or a button under the middle finger.  Scopes and traditional red-dots are usually fastened to a mounting rail on top of the gun.  .22 pistols, and most rifles, often come with a rail, or have provision to easily add a rail.  Note that these kinds of guns do not have a slide that cycles, as red-dots are heavier, and would be thrown off after a few shots.  Holographic sights are lighter, have a lower center of gravity, and are attached by machine screws, to withstand the violent forces of a cycling slide (on handguns).  These require that the slide be machined to accept a mounting plate, on which the sight is mounted.  If the handgun comes to you Optics Ready (OR), the slide will be machined already, and a cover plate installed.  Here is the catch: the slide cut on the pistol has to match the mounting plate, which has to match the optic.  There are at least three different standards, so make sure you have a plate that fits the slide underneath, and the optic on top.  If you want to install a holographic sight on a pistol that does not have the slide machined, there are services that will do that work for you.  Buy the optic first, so the shop can make the cut to match the plate.

Co-witness sights
When an optic is set up to co-witness, that means that you can see both iron sights through the optic.  You would not actually use both options, but if your battery is dead (very common), you still have a way to use the gun in a crisis.  Sometimes the rear sight has to be removed to install the optic.  In many cases, the iron sights are too short to see through the optic.  Sometimes, the iron sights can be replaced with taller sights to fix this problem, sometimes not.  If you want this type of optic, it is probably worth the money to buy a gun with the optic installed at the factory, with the understanding that the iron sights will co-witness.

Battery issues
The top makes of modern holographic sights have very long battery life, sometimes a year.  You will still lose track of it, unless you make a note on your calendar.  In any event, if the optic has to be manually turned on, and you are in a crisis, you are hosed, unless your sights co-witness (and you have practiced that way).  There are some optics now that contain motion sensors, and will turn on as soon as the gun is moved, and will shut down automatically after the gun is still for a time.  For a gun destined for self-defense duty, this feature is not optional.

Training issues
The process of quickly acquiring a sight picture, firing, and follow-through, is quite different with any type of electronic sight versus iron sights.  They can be a benefit in slow fire, but a drawback in rapid target acquisition, or in target transitions.  For many of the reasons listed in this article, I don’t recommend any of these options for a self defense gun, especially considering that self defense usually happens at 5 yards or less.  There is a law of diminishing returns.  Pushing your defensive skills out to 10-15 yards with stock sights is not that hard, with the right fundamentals, the right training, and practice.

However, electronic sights are fun to use, and are very useful for target shooting.  Within a few years, I expect that most semi-automatic handguns will come from the factory with slide cuts and cover plates.  It will then be up to you to decide if those devices fit your needs.