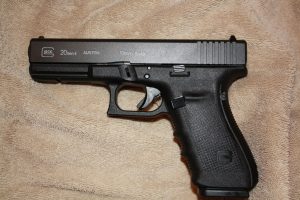 In a similar manner to revolvers, modern semi-automatic pistols can be divided into three categories by the manner in which their triggers operate.

1. Single-action (SA)
This system offers the same short, crisp trigger pull for each shot. In order to fire the first shot quickly, single-action pistols must be carried with a round in the chamber, the hammer cocked and the manual safety engaged (the so-called “cocked and locked” condition). Although not comfortable for all shooters, this is currently being taught in most schools as a safe mode of carry. Nearly all single-action pistols are equipped with an exposed hammer.

2. Double-action/single-action (DA/SA)
In this type of fire-control mechanism, the first shot is fired in a double-action mode using a long, heavy trigger pull to cock and release the hammer. Subsequent shots are fired in a single-action mode. This system allows the pistol to be carried safely with a round in the chamber and the hammer lowered, while still allowing a rapid first shot. However, the different modes of trigger operation involve different grip positions, thus consistent accuracy is difficult to maintain. Most double-action pistols have an exposed hammer and a decocking lever that provides a fast, easy and secure system to lower the hammer on a loaded chamber.

3. Double-action-only (DAO)
The double-action-only trigger system is preferred by many law enforcement agencies as it is felt to be safer and “defensive” in nature. However, the long, heavy trigger pull of most DAO systems is not conducive to accuracy. This led pistol manufacturers to devise various ways of reducing the DAO trigger pull without sacrificing the inherent safety and perceived defensive nature of the system.

Such systems are now common and essentially operate by partially pre-cocking the striker to reduce the heavy double-action trigger pull and reducing trigger travel.

Most DAO pistols are hammerless with a striker firing pin system.