Today let’s talk about the lowly .22 pistol.  I say “lowly” only because no one considers this a suitable caliber for self-defense.  However, don’t forget the first rule of gunfights, attributed to Col Jeff Cooper: bring a gun.  A .22 is always better than nothing, but just barely.  Yes, a .22 will kill a person, but usually only if you hit them in the head, neck, or femoral artery.  Hitting other places may do the job, but not quickly enough to save your life.  That said, if the pistol holds 10-15 rounds, I would be willing to stipulate that 8 or more fast shots on center mass is very likely to change the dynamic in the case of a home invasion, with only one or two assailants.

However, if a .22 pistol is small enough to carry concealed, it won’t have enough ammo to help you much, and accuracy will be difficult (see Rule 1).  If all you can carry is a pocket gun, then get a .380.  Many people also consider the .380 to not have enough stopping power, but it is almost as powerful as a 9mm, and will clearly stop an attack if you have good shot placement, especially if loaded with +P ammo.  Yes, I know +P can wear out a .380 over time, but it won’t hurt to use it for self-defense; just don’t practice much with it.

So, for this discussion we’ve mostly eliminated the .22 from concealed carry (see Rule 1).  That leaves us with bigger guns, which are mostly target pistols. Competition target shooters will often spend big bucks on these, over $1000 for models from Walther, Hammerli, or Smith & Wesson, but there are some very nice models available for $300-500.  Two of the best known are the High Standard Sport King and the Browning Buck Mark, but I am going to write about two that I own: the Ruger Mark III 22/45, and the Colt 1911 (22).  Both are fairly heavy, have large capacity, and have long barrels; accuracy is quite good, and recoil almost non-existent.  Keep in mind that the kind of accuracy inherent with guns like these means hitting a 4 inch circle at 25 yards;  even a fairly new shooter could hit a person 10 times in a row at 7 yards. 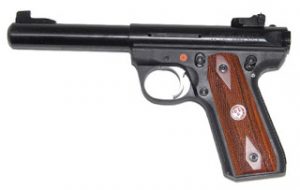 Ruger Mark III 22/45
This is the newest version of a gun first produced in 1949, that popularized the .22 pistol.  The standard Mark III has a 60 degree grip angle, like a Luger, while the 22/45 version has a 75 degree grip angle, like a 1911.  They come with a fully adjustable rear sight, and threaded mounting holes for a rail (also included) for mounting a scope or red dot.  There are also many available accessories, like fiber optic front sights, competition triggers, springs, grips, etc.  You must get a speed-loader for it, as the magazines are difficult to load by hand.  Cleaning the gun is also difficult, as the break down process is complicated and frustrating.  Still, this is one of the most accurate and popular guns on the market, in its class. 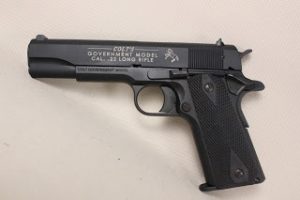 Colt 1911
This is not actually made by Colt, but by Walther in Germany, under license to Colt.  It is, however, absolutely identical to a Colt .45 1911, including the weight.  Many parts, like grips and springs, are interchangeable with real 1911 pistols.  It is a finely engineered handgun, equal in most ways to the Ruger, and better in some.  Disassembly and cleaning are very easy, and accuracy is very slightly better.  Walther makes two models of this gun: the Government Model (the more tradional M1A military style), and the Gold Cup (which has adjustable rear sights).  This model does come with a speed-loader.  I have the Government Model, but wish I had spent a little more for the Gold Cup, for the adjustable sights.  However, I am not unhappy at all with mine.  It is fun to shoot, and cycles the finicky .22 rounds perfectly.

There are other benefits to shooting a .22 target pistol:

In a perfect world, I would love to start all beginners on a .22 target pistol for a few weeks, then step up to a bigger caliber, but that is not practical.  It is a great way for people to get started with shooting, so if you have room in your budget for two or more guns, consider starting with a good .22 target pistol.