While all handguns have various safety features built-in, the ones on a revolver do not require the user to do anything, so we will only discuss semi-automatics in this paper.  Safety devices fall into five groups, with every semi-automatic having at least one of these features, and sometimes several.  Two of them require no action from the user, but will be included here so you have a more complete view of the features.  Please not that, as a safety protocol, you should never count on a safety working.  Failure of a safety device is extremely rare, but anything mechanical can break.  Never trust a gun, except in a combat situation, where you have no choice.  In this paper, I will use the term “True Safety”, meaning that a 3 year old child would be stopped from firing the gun.

Guns with decockers, though uncommon, are harder to understand and use than other types of guns.  Police never use these.

The pistol above has both a drop safety and a grip safety, which are redundant.  Marketing. 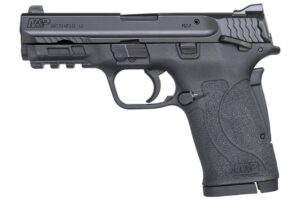 This pistol has both a thumb safety and a grip safety.

Hammer-fired guns (old school) have more sensitive triggers, so they will always have a thumb safety or decocker, and sometimes both.

Striker-fired guns cannot have a decocker, and seldom have a thumb safety.  That is considered optional, for these reasons: