Well, not exactly new. In keeping with my collection of Soviet-bloc Cold-war weapons, I recently acquired a 1953 Romanian TTC military sidearm.  It is a semi-automatic, chambered in an unusual caliber: 7.62×25, the so-called Tokarev round. This cartridge, and the pistols that fire it, were developed in 1930 by a Russian engineer named Fedor Tokarev to replace the aging Nagant revolver.  The Tokarev cartridge contains a .30 caliber bullet (smaller than a .32), but is much longer than a 9mm.  The result is a bullet that develops a muzzle velocity of 1500 FPS, which is considerably more than a .45, and comparable to a .357 Magnum. I wouldn’t recommend shooting a burglar in your apartment with this beast, as the bullet would go through the burglar, and probably through the adjoining wall! 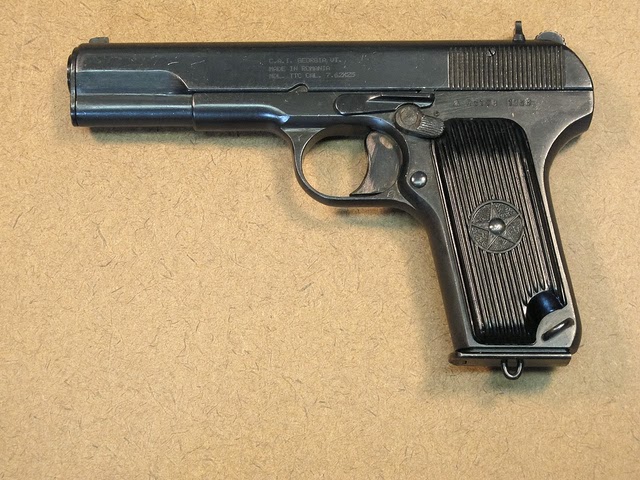 Those of you who have studied wound ballistics will know that the most important factor in stopping power is not the size of the bullet (caliber), but the speed it travels. That’s why a .357 Magnum has greater stopping power than a .45, even though it is considerably smaller.

After WWII, with the new political alignments in Europe, the Soviets “encouraged” their partners (including Romania, Poland, Hungary, and later, China) to build their own weapons, but using Russian models. The Romanian TTC is an exact copy of the Russian TT-33. The Romanians wanted to chamber it in 9mm, as that had become the de facto standard, but political factors forced them to adopt the Soviet standard, 7.62×25 (Russian combat rifles had used the 7.62×54 for decades). Tokarev ammo generally can’t be bought off the shelf, but it is still made by some major European manufacturers (Sellier & Bellot and Prvi Partizan), and is readily available by mail and at specialty dealers.

This pistol is incredibly loud, and has significant recoil, as it essentially fires a small rifle round from a pistol, but the long, all-steel gun balances that recoil well.  The accuracy is very good, and it fired 30 rounds flawlessly, but the gun will require a lot of break-in, as it has been arsenal-refurbished, and the trigger pull is very stiff.  This would have been a very stout officer’s sidearm, and lethal at a considerable distance.  It came with a 1950s leather holster, with space for an extra magazine.