Welcome to McKinney Firearms Training! I am Dr. Gilbert H. "Sandy" Keathley. I have been a gun enthusiast for many years, having grown up in a family of hunters. My first experience shooting was going to the city dump and shooting at bottles, using a 1939 Mossberg .22 bolt-action rifle that my grandfather bought by mail order from Montgomery Wards (You never heard of Montgomery Wards?) (I still have that rifle). Years later, I shot the M14 and M16 rifles in the U.S. Army, where I was awarded the Bronze Star for service in the Cambodia Campaign in Viet Nam (1970). It was after military service that I started shooting semi-automatic pistols, and later, revolvers.

Over the next 30 years, I taught music in both classroom settings, and in one-on-one situations, in places as diverse as Colorado State University, Southern Methodist University, Richland College (Dallas), and public schools in Irving, Richardson, and Plano. I bring to my classes the benefit of over 20 years of teaching experience in the college classroom.

One of the foundations of American exceptionalism is this: the Founders understood that the greatest guarantee of freedom is an armed citizenry. Their experience with England led them to believe that the people required leverage to prevent tyranny. That is why the 2nd Amendment is codified in the Constitution, second only to freedom of speech and religion. While some would have you believe that only applies to militia units, that is a (deliberate) misreading of history. The government needed no authority to arm the military, and the "militia", in the 18th Century (according to George Mason), was the entire population. Until well into the 19th Century, most counties in America had a "militia", which was every able-bodied man in the county. They could be called up at any time (usually to fight Indians), and were expected to supply their own weapons and gear.

I encourage anyone who feels confidant to do so (especially women), to get a Concealed Handgun License, and carry a personal gun daily, but it is important that they do so safely, and can shoot accurately. Check out my blog for tips on shooting, and gun control news.

I am a recipient, every year since 2015, of the "Best in McKinney" award, and a member of the "Business Hall of Fame".

I hold the NRA rank of "Distinguished Expert" in the Pistol category. 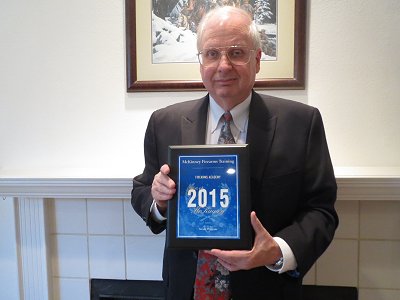 What I can offer you:

I am an NRA-Certified Firearms Instructor, with ratings in Pistol, Personal Protection, and Range Safety Officer.
I am DPS-Certified to teach Concealed Handgun law, and have been vetted by the FBI.
I am a U.S. Army veteran (25th Infantry, Viet Nam), and proud of it.
I am experienced, and carry liability insurance.
I offer the class and the Proficiency on the same day.
I have a private outdoor range.
I will make sure you can pass the course.
I will make the process simple.
I have been rated

by my students on Google. 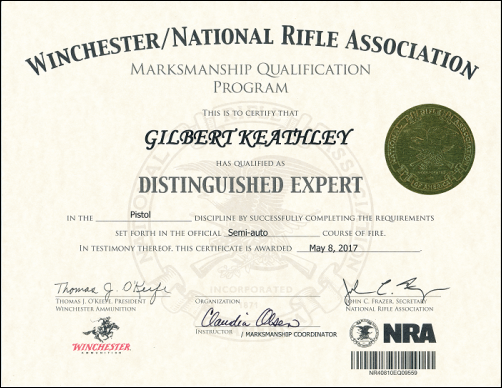